It was a slightly dim and crisp morning when the young boy silently departed from the warm and cozy companion of his blankets and bed.  Thoughts of fighting large bass and walleye gelled inside his small head.  With small pattering footsteps to the kitchen, he used all his might to pull the fridge door open and reach for the foam carton of nightcrawlers’ that sat deservingly next to last evenings supper leftovers. The fridge’s strong luminescence of heaven-like light, made him squint as he slowly lifted the container cover to peek and ensure an ample number worms to last an outing. He was so proud of his squirmy, slimy, and juicy offerings that he had handpicked last evening after supper.

The boy simply loved to catch worms -- he loved to nightcrawl! He loved to wet the large manicured grass lawn before supper. At supper, he tried to hide his anxiety while slurping down enormous servings of mom’s mouth watering spaghetti – ironically thinking of the worms at hand, while squeezing long wet noodles between his tiny puckered lips. Then with a full stomach, into the darkness and under the glimmering North Country stars, a flash of light off the wine colored, segmented worm flesh that lay fully in the open as if espied upon a secluded beach was as good as Yukon gold! Others were not as liberal, and the boy had to quickly grasp, feeling the segments, tugging and pulling the worm from its gravel burrow. He so loved to be alone in the darkness, just him and this simple sort of hide and seek game.

Slowly and carefully closing the door behind him, the boy set off on foot -- a fishing adventure, which in all truth was all too familiar with him. Traversing the hill that overlooked the massive blue lake, the ground crunched beneath him, still hardened by the morning’s frost. His footsteps – soft but firmly placed -- mimicked a native warrior carefully stocking his unaware prey. He did not want to startle the unrestricted, loosely owned dog that occasionally guarded the home that lay at the pinnacle of his walking path. Clearing the home without conflict, the boy looked down on the small, still sleepy lakeside town -- not a soul was stirring, not even a dog.

It was in the small town that the boy would rather not be seen. There was really no rhyme or reason for it – although he was somewhat shy –  he just sort of had a preference for carrying out a task without the utmost resistance. Approaching the still seemingly immobile railway station, the vigilant boy slid out of view by using stationary rail cars to obscure himself until he felt confidentially out of sight. He was always quite suspicious of the gruff railway workers, as they may have unwavering opinion that no pedestrian should exploit the privately owned tracks for their own benefit. Moreover, the boy often worried that the railway men would begrudge him and permanently curtail the important passage way to his favorite haven, “the rapids” fishing grounds.

The boy’s view of the old magnificent lift bridge was monumental especially when the great black truss was angled and pointing to the north east sky, disconnected from then strange land it served. The boy cherished the idea that the disconnection was an impediment to those other people, those people that were candidly known as “Limey’s” by his fellow countrymen. The boy remembered the time he was fishing on the granite finger-like adjunct when three “Limey’s” capriciously threatened him with hurled stones and screamed obscenities. One boy screamed “We will get you! You damn Yankee!” The boy struggled to restrain himself from casting a stone, obeying his conscious and the voices of his mother citing the Bible verse “Do to others as you would have them do to you”. 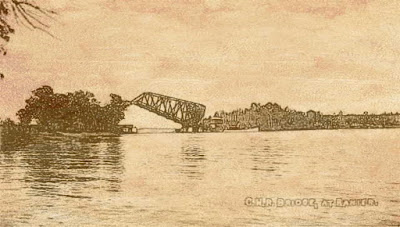 The boy relished the fact that an uplifted bridge extinguished the calamity of the crossing train, its reverberating horn,  the clacking wheels and the creaking cars. Not to mention, no trains meant also an elimination of the possibility of being seen, hence reported by the train conductor. Ultimately, the boy only longed for tranquility and the sound of the once placid lake water turned to a glorious chuckle as it transformed into a great river. He also loved the sounds of the scavenger-like, brazen calls of wing-beating gulls and of course, the occasional graceful but crying loon.

The lone boy distinctly preferred the early morn, since the narrow channel of rapids were nearly void of motoring boats that sometimes rudely created disturbing, maddening sizable wakes and an unwanted intrusion of the boy’s earned silence.  He was actually quite fond of the boats that puttered by at a more reasonable speed, since he had time to reel in his line, in fear of it being cut by the propeller.  On one occasion, after casting a large Daredevil spoon for Pike nearly across the channel, a fast approaching speed boat took the boy by surprise.  The boat, not giving up any speed, caught the mono-filament fishing line, quickly peeling it off the reel and nearly jerking the pole out of his hand prior to the line end breaking.

A miniscule mixture of slime and guts splattered upon the boy’s fresh face as he baited the half miserable worm to a sharp looking bronze hook, shadowed by a large bright foam bobber. Subsequently, the boy scurried ever so quietly down a small granite shelf and leaned his pole to cast just upstream of the bass inhabited sunken rock crib. Just as the foam bobber twitched, suddenly the boy, now a young man, woke from a deep sleep!  He slowly pushed up his worn suede hat, slowly stroked his mustache and rubbed his blue eyes that squinted from the bright light. Looking upon the nearby swift, clear, running creek and the surrounding greenest of mountains he knew so well, he surmised that he had vividly dreamed about his youth.

Prior to his slumber, the young man had been fishing a creek adjacent to private lands when he overheard a deluge of utility trucks via an old dirt logging road,  that were seemingly encroaching in on his piece of sought out solitude. A trailing wall of forthcoming dust resembled a grand stampede in the arid West. He queried whether he could be considered a trespasser and if any of the working men would even ponder the thought of him being a menace.  Regardless, and still not of the trusting sort, the young man laid tight to the unseen bank as the vehicles rushed by and a cloud of road dust hovered over him. And then followed, a tumultuous afternoon breeze, which flowed through the skinny valley, carrying distant sounds of machinery accompanied by inscrutable groans and creaks followed by muffled explosions.

The young man grew frustrated as he had purposely tried to find solitude in the mountains on such a beautiful day, only to be followed by hurrying working men.  He remembered not long ago, when the forest was free of such men and the inhabited wildlife was free to roam, without strife, which he now solemnly encountered. Still vexing, the young man did divine that the hurried men probably had families, which depended on paychecks too; and that it was not completely their decision that caused them to make such a disturbance. He contemplated a possible paradigm of corporate greed, environmental neglect, and an ever increasing population. While he pondered whether he would ever find solitude again, his now deceased mother's spirit whispered a Bible verse: "Do not let the sun go down while you are still angry". 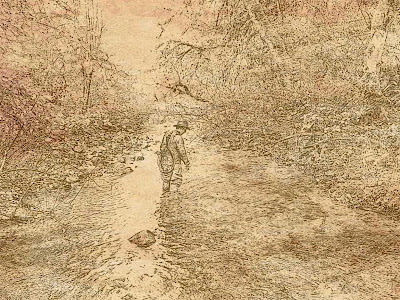 Still slightly aggravated, the young man shuffled carefully to a more tranquil spot near the creek.  Now farther away from the buzz of the busy road, he could only hear the cascading creek as it dropped several shelves and glided into a large striking indigo pool just below.  Laid out there comfortably on a soft bed of moss, the young man had grown weary from his long trek and the heat of the mid-summer day was upon him. Just before dozing off, the young man reflected on his day and how it was unfortunate that he belatedly started his fishing adventure. Now, in the midst of things, the bees were buzzing, the fish were mockingly indolent and the young man was pestered by the thought of having to sneak back home without much trace in the evening. The young man could only reflect back on those glorious solitary morns he so loved as a boy.

Friend of the Fly

Promote Your Page Too

Friend of the Fly - Ebay Store