A Fly Fishing Short: Advent of an Oarsman 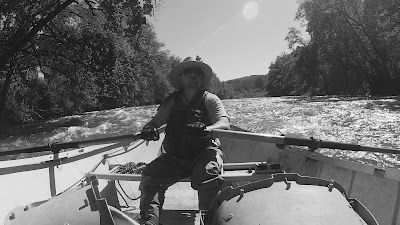 Sitting next to the slow trickling creek, I caught myself daydreaming again and thinking of how everyone remembers there first time of something. For instance, do you remember the first time you kissed? or the first time you loved? Maybe the first time you danced?  But how about the first time you rowed a boat?  I continued to ponder and began to focus on a slow drifting dried leaf that struck a tone, conjuring warm thoughts of my McKenzie drift boat. The old but sturdy aluminum frame appeared to me like when I first pulled her home on its trailer with no taillights. Yep, I made it home!  I remember how excited I was, dreaming of all the new water adventures in store. Nevertheless, I will admit that the boat acquisition is noteworthy; however, what struck me the most was the remembrance of how I learned to row the oars, and navigate a mountain headwater stream, an adventure I’ll never forget.

Prior to actually floating down a raging river, I wanted to get some time on the oars in some water that was nothing but placid. In fact, this was the advice of the former boat owner that I took all the way to a nearby Dorena Reservoir. The boat launched, I sat awe-inspired by the beautiful mountainous surrounding, drifting quietly on the smoothest of morning glass-water. Rounding my shoulders, I drew the oars and pulled my boat a good three miles from the landing. My little excursion was so grand, until a strong consistent wind came from the northwest, turning liquid glass into a frothy chop. Struggling like hell to make it back, a ski boat full of bikini clad women happened to pull aside my gunwale and with an ever-so concerned voice yelled “you wanna tow?” Like the two idiots in the comedy film Dumber and Dumber, I stuck to my guns and replied “I’m good! Not far to go!”

After the lake excursion, I had decided that it was time to “just do it”; besides, a swimmer doesn’t swim without getting wet!  But I didn’t know anyone that had drift boat experience and I didn’t know a soul that wanted to take a chance as a drowning passenger due to my lack of water skills. Not to mention,  I was  pretty much clueless about river navigation and what kind of hazards, twists and turns may lie ahead. Nevertheless, I conducted my own research and turned to several books that covered essential navigable drift boat techniques. With the help of Google maps and some word of mouth, I settled on a slower flowing portion of Oregon's famous Willamette River just after the confluence of the wild and scenic McKenzie River.

On a crisp and clear autumn morning I arrived at the boat landing with some caffeine induced nerves and accompanying stomach butterflies that I hadn't really experienced since my first varsity ice hockey game. My trusty Diamond Back mountain bike sat disassembled in the boats stern to serve as my shuttle back to the truck.  The narrow landing, somewhat blocked by a large rock, was a challenge to say the least as I jockeyed the truck and trailer for what seemed like an absurd amount of time. Backing so far as to cover the tops of my trailer tires, I had forgotten that the flat and rockered drift boat bottom allows it to float freely in about 2 inches of water. Well anyways, after a little shove off the trailer, I pulled and drove the boat's hull into a nearby gravel shoal -- looking around sheepishly to see if anyone had noticed the "new guy" at the landing.

After getting my paddles and gear set, I looked out to the narrow channel that would take me to the main flow of the river. As I started to row away from the comfort of the landing and its safe harbor, the boat suddenly slipped past an obvious current seam and I unexpectedly started to drift in an uncontrollable manner. Moving faster,  instant panic set in as I firmly gripped my flailing paddles. Focusing on back rowing away from the eastern bank, I failed to notice a large downed tree, otherwise known as a strainer, coming up quickly on the opposite bank. I suddenly felt a large thud that seemed to emanate from the boats bow. As rushing water began to pin my boat against the tree, thoughts of impending doom flashed in my head. Somehow, I was able to calm myself, and using the wooden paddles like levers, I was able to wedge the boat off of the slightly submerged tree and back into the fast moving channel water.

Unconstrained at last, I finally found the main channel and looked ahead in wonderment of what other surprises may be presented. Still keeping my eyes on the water, I quickly grabbed my printed out river maps to try to gauge my location. Still trembling, I witnessed a pod of rising trout in some soft misty water near the not-so-far bank. Wanting to cast a fly or two, I looked back at my anchor, only to find a tangled intricate mess of knotted rope, which ultimately denied a boat yielding anchor drop. Truthfully, the smooth surface of the water was quite deceptive as the strong currents carried me further down the Willamette Valley and farther away from the trout catching chance. As my frustration with my lack of preparedness and experience began to build, I assured myself that there were plenty of more fishing opportunities downstream.

Further down stream, some small riffle runs would challenge my rowing skills. I began to grasp the fundamental concept of ferrying -- back-rowing a boat at roughly a 45 degree angle to avoid obstacles. I started to comprehend why an angle is preferable, while noticing and feeling less restriction and easier rowing as the boat seemed to slip effortlessly across the river. The feeling is unique to say the least when compared with v-hull designed boats. All the more, I was starting to harness some confidence as I progressed: my new found faith, allowed me to anchor at several points, to drink a beer, eat some lunch, and catch a few average size trout. Any doubts I had previously about the boat were instantly erased, as I relished the new floating aluminum addition to my fly fishing tool box.

Approaching the 3/4 mark of my float trip, I drifted upon a confusing point of three channels. Looking at my map, it seemed that all three channels could be navigable. I unfortunately opted for the eastern most channel, which happened to look very inviting and fishy. Halfway thru the channel, the waters began to slow and the river bottom became more and more visible. The boat eventually was slowed by bunches of slightly submerged thick vines of what looked like kelp. Unfortunately, I was too far in to back row back to the main channel, so I opted to get out and pull the boat over the clinging vines. Sweating profusely in the heat of the day, I finally reached deeper water near the main channel. I remember thinking back about one of the drift boat books I had read and the quote "when in doubt, always follow the main flow".

My journey was nearly complete as I approached the boat landing, nearly eight miles from my starting point. I was suddenly overcome by relief and realized that the only challenges that remained was a bike trek and the loading of the boat. Packing my backpack, and reassembling my mountain bike, I guzzled my last beer, already thinking about my next trip. Slightly buzzed, the pains in my lower back and shoulders were virtually non-existent -- all I could feel was a sense of victory as if I had conquered some instrumental quest. Pedaling on the size of the road, cars buzzing, I imagined that my fly rods jutting skyward from my back pack served as flags signifying the end of a great conquest. It was truly the advent of an oarsman, a glorious event in which I will always remember.

Friend of the Fly

Promote Your Page Too

Friend of the Fly - Ebay Store